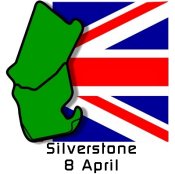 Qualifying for Heat 1 saw Mike Wilds’ Ensign take pole position 0.4 seconds under Alan Jones lap record, unfortunately Mike’s demon Holbay failed and meant a less powerful unit would have to be installed for the race. Ian Taylor used his F Ford experience of the track to line up second although he would also require an engine change, Alan Jones in his GRD completed the front row.
French visitor Christian Ethuin Motul Martini was fastest of the Heat 2 runners with a time a full second slower than Wilds pole time from the first heat. Russell Wood placed his March next to Ethuin with another of the French runners, Alain Serpaggi third in the works Alpine-Renault. Tony Brise found himself back on the third row when his practice was hampered by a loss of compression in one cylinder of his Holbay, Brise was using his 1972 GRD in preference to the later model as he preferred the handling. Also having engine bothers were Mike Tyrrell whose Vegantune seemed down on power and Damien Magee who had his Novamotor fail during qualifying so a Holbay was installed for the race.

Mike Wilds made the best start in Heat 1 but Ian Taylor took the lead at Copse with Michele Leclere moving up to third ahead of Alan Jones. Jacques Lafitte was making good progress and soon moved his Martini up to third ahead of Masami Kuwashima’s GRD, Jones dropped back to fifth and Leclere to sixth with Larry Perkins next in seventh. There were problems at Abbey when Gunnar Nordström, Brian Henton and Johnny Gerber all went for the same piece of track at once, Henton spun and retired whilst Alain Cudini’s Alpine spun to avoid Henton and was struck by the March of Max Bonnin who seemed not to see the yellow flags. The GRD of Nordström and the Brabham of Gerber escaped the mess and were able to continue.
Lafitte took second at Becketts on the second lap with Taylor still just in the lead, next up it was Jones, Kuwashima, Perkins and Leclere. Wilds made his move on lap 3 taking the lead on the exit from Stowe only to find Lafitte passing him at Club, Wilds having no further chance to reply as his engine ran its bearings at Abbey. Alan Jones now moved up to second but Kuwashima was flying and took the lead on lap 5 whilst Jones found himself on the way to the pits with a stuck throttle spring, the Australian loosing a lap whilst it was fixed.
Kuwashima still lead from Perkins with Lafitte third despite a grassy moment at Copse on the sixth lap and Taylor in fourth. On the penultimate lap Perkins passed Kuwashima at Woodcote and on the last lap he pulled away through Club and Woodcote to take the win by 0.6 seconds from Lafitte who took second from Kuwashima by overtaking the Japanese on the grass at Woodcote! Taylor took fourth right behind Kuwashima the March slowed by poor handling from a slow puncture, Leclere’s Alpine was fifth hampered by fuel starvation. Nordström took sixth despite his earlier problems at Abbey, the Swede just holding off an impressive Danny Sullivan having his first F3 race in the Ehrlich.

It was all Russell Wood in Heat 2, his March took the lead at Copse on the first lap and then proceeded to draw away from the rest of the field to win by an easy eight seconds despite a sideways moment at Stowe on the second lap. Alain Serpaggi held second for the first three laps until Christian Ethuin demoted him at Woodcote, Tony Brise was fourth for two laps before his engine blew elevating Mo Harness up a place. All of these leading runners were well spaced out and all eyes were on the battle for fifth spot. Hakan Dahlqvist had his Merlyn just in front of Jean-Pierre Paoli’s Martini, Richard Robart’s GRD and Lionel Friedrich’s March. Brazilian saloon car champion Friedrich was going very well in his first F3 race, in fact his first experience of F3 was in practice for the meeting as his car wasn’t completed until then. Paoli tried to get ahead of Dahlqvist at Stowe on lap 8 but the Frenchman lost control of his Martini spinning out and retiring. Dahlqvist managed to hold his fifth place to the flag just ahead of Friedrich and Robarts although the Swede managed to miss seeing the chequered flag and hit another car on what should have been his slowing down lap, fortunately damage to both cars was slight.

For Sunday’s final the runners from the faster Heat 2 were to the fore of the grid and the leading positions were:

Quick runners at the back who had heat problems but who had qualified through fast race laps included Mike Wilds, Alan Jones and Jean-Pierre Paoli.

As the flag fell Danny Sullivan was an immediate retirement with his Ehrlich gearless and Leclere made a huge jump start from the sixth row, he was up with the second row by the time the race officially got underway. Serpaggi lead into Copse from Ethuin, Wood, Taylor, Harness, Lafitte and Dahlqvist whilst Wilds and Paoli in trying to make up for their lowly grid positions both hit the bank at Becketts after making contact with each other. Wood took advantage of the slipstream of the two leaders to push his March into the lead by Stowe and at the end of the first lap it was Wood from a smoking Ethuin, Taylor, Harness, Serpaggi, Dahlqvist, Lafitte, Kuwashima, Friedrich, Perkins and Magee.
Wood increased his lead on lap 2 as Taylor took second at Stowe from Harness and Ethuin who was shortly to pit with his engine blown. Lafitte moved into fourth on Ethuin’s retirement and behind the Martini a huge battle was developing for fifth between Kuwashima, Serpaggi, Dahlqvist, Friedrich and Max, Perkins had been with the group until he spun at Abbey on lap 4 and out on the same lap was Magee with a jammed relief valve. By half distance the front four cars were all well spaced out and Kuwashima and Max had pulled away from Friedrich who had also moved clear of Dahlqvist and Serpaggi. Friedrich was the next to retire when on lap 12 he had to pit when his rear wing came loose.
Alan Jones had been driving well from his back of the grid start and by half distance he had moved his GRD up to a solid ninth place and behind him there was a scrap between Conny Andersson’s Brabham, Bernard Beguin’s Martini and Richard Robarts’ GRD but all three were soon out. First Beguin spun at Stowe and then retired with a broken fuel pump, Andersson was out with a puncture and Robarts engine cried enough. As Robarts toured in from Abbey he was narrowly missed by the Royale of Val Musetti and in going off line Musetti had a huge accident from which he was lucky to escape injury.
Wood’s lead came under threat following a sideways moment at Stowe on lap 11 and by lap 14 Taylor was right behind Wood and began to put him under heavy pressure. Taylor set a new lap record in his chase and on lap 16 he took the lead into Stowe but Wood retaliated around the outside of Taylor as the cars went under the Express bridge and as the two cars entered Woodcote side by side Wood dived across on the inside to regain the lead. Wood stayed in front for lap 17 but on lap 18 Wood had a grassy moment at Stowe which allowed Taylor back in front, Wood however stayed right behind Taylor and was notably quicker from Club to Abbey. Lap 19 and Wood continued to sit on Taylor’s gearbox and then on the final lap as Taylor left his braking as late as possible into Becketts his wheels locked and the white March ran wide. Instantly Wood was back in front and although Taylor lost little ground Wood’s extra speed through Club allowed him to stay ahead and take the win. Harness and Lafitte finished in third and fourth unable to catch each other or the two leaders. Kuwashima took fifth just beating Dahlqvist to the line, the Swede passing Jean Max on the final lap, Serpaggi was close behind in eighth with Alan Jones a couple of seconds back in ninth.