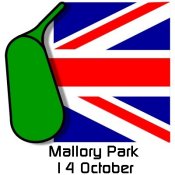 Sufficient cars arrived for this, the penultimate round of the John Player Championship, that the field was split into two heats to decide who would make the 20 runners in the final.

It had rained overnight and the track was still damp when the Heat 1 runners began their session, most of the drivers, Mike Wilds and Brian Henton being a notable exceptions, opting to run wet tyres. Tony Brise was fastest of the first group with Brise much happier with the handling of his Kent Messenger March now that a broken engine mount had been discovered and repaired. Second quickest was Russell Wood who had fitted the Novamotor from Buzz Buzaglo’s car finding it a big improvement over his normal unit, Richard Robarts completed the front row to make it an all March affair. Leonel Friedrich had been fourth quickest but on his final lap at Gerards the Brazilian had a huge off damaging his March beyond immediate repair. Further back on the grid Jac Nelleman was having an outing in a DART GRD as Pedro Passadore was apparently still afflicted with ‘flu, Wilds found his choice of intermediates was too optimistic whilst Henton tried slicks on his Ensign that still wasn’t properly sorted following a huge accident at midweek testing at Oulton Park. Stirling work by Mo Nunn and his team saw it rebuilt in time for qualifying even if it was wearing a 1972 Colin Vandervell nosecone.

It was a March on pole for Heat 2 also, this time driven by Conny Andersson who shared the same time as second and third men Jacques Lafitte and Jean Pierre Paoli in their works Martinis. Further back John MacDonald was running in the ex-Damien Magee Brabham BT41 and debutante Rod Smith was in the ex-Richard Knight GRD 372. Masami Kuwashima found his practice time severely curtailed when the Holbay in his March proved reluctant to start.

It was dry for the start of Heat 1 and it was Robarts who made the best getaway to head Brise, Harness, Wood and Wilds who had made a great start. Ian Taylor was slow away being blocked by Wood and Nelleman only made it to Gerards on lap 2 before the Dane lost it in a big way writing the GRD off against the bank, new unscrubbed tyres were cited as the cause. Robarts continued to lead until lap 8 when Brise slipped through into the lead at the hairpin, Robarts fought back and regained the lead at Gerards, the Myson driver kept his lead for the remaining lap and a half to lead Brise home by 0.6 seconds, Harness was less than a second down in third with Wilds who had demoted Wood fourth. Henton pulled up well from the back of the grid to finish seventh despite loosing his clutch on lap 2.

There was chaos at the start of Heat 2 when Jean Ragnotti, in an attempt to make up for his back of the grid start, went off and hit the Armco by the pits fortunately without personal injury, also involved was Tom Hilliar who damaged the suspension of his Ensign in the accident. In addition Ragnotti’s team mate Albera punctured a tyre while further round the lap Francia spun his Brabham at Gerards so both men were pleased when the race was red flagged to allow the marshalls to remove the mangled remains of Ragnotti’s March. At the restart it was Andersson who got away the best and proceeded to leave the rest of the field behind him as the Swede pulled out a lead of over four seconds. It was Paoli who slotted into second as Lafitte made a slow start but by lap 6 Lafitte had recovered and he pushed his team mate back to third. Alan Jones was tenth on lap 1 but he soon began overtaking the cars in front and he moved his GRD up to third by the finish pushing Paoli back to fourth and closing right in on Lafitte. Retirements included Barrie Maskell with fuel pressure problems in the Dastle and Hakan Dahlqvist who damaged his Merlyn at the hairpin.

It was originally intended that the fastest 20 would take part in the final but Rousselot complained that the Ragnotti accident had slowed the second heat so it was decided to take the first ten from each race.

Once again Andersson made a great start and immediately opened out a small gap to the next bunch comprising of Harness, Brise and Robarts with a further gap to Jones, Wilds, Lafitte, Beguin, Wood, Rouff, Kuwashima, Henton, Perkins, Nordstrom, Taylor, Francia, Spitzley, Rousselot and “Teleco”. Paoli was a first lap retirement after hitting the bank at Gerards, Rouff loosing his nosecone in the incident, he quickly fell down the field with his car handling very strangely.
Brise was harassing Harness for second place whilst Robarts quickly lost places to Wilds, Lafitte and Jones, Henton was driving carefully further back in the pack, picking up places as and when he could. The unfortunate Andersson only lasted in the lead until lap 7 when his gear linkage broke near the lever forcing him into the pits and retirement. This left Harness in the lead with Brise still on his tail, the two leaders were briefly held up as they lapped the tardy Rouff allowing Wilds and Lafitte to close up a little whilst Jones and Robarts were dropping away. Henton was now flying, he had pulled away from Wood and on lap 15 he passed Robarts on the inside at the Esses and a lap later he repeated the move on Jones except this time on the outside.
Leader Harness was now finding understeer a problem and he was beginning to hold up those behind him which was benefiting the fast closing Henton. Lap 24 and Harness was reduced to weaving to try and keep Brise back the following lap and Wilds made his move pushing Brise back to third. Two more laps and Harness was finished both Wilds and Harness getting the better of him, Henton and Lafitte were next up, the works Ensign having passed the works Martini on lap 26 and two laps later both drivers pushed the poor Harness back a further couple of places. With a lap to go Henton was doing everything he could to catch the two leading Marches and on the final lap Henton took the inside line at Gerards and pulled level with Brise but along the Stebbe Straight Brise moved across on Henton pushing the Ensign onto the grass. The Ensign had a bumpy ride before it regained the track loosing a place to Lafitte in the process.
Therefore at the finish it was Wilds that took the win 1.2 seconds ahead of Brise, Lafitte and Henton but Henton protested Brise’s tactics, the stewards agreed and Brise was disqualified for some dangerous driving that could have had serious repercussions. Harness took fourth just behind Henton with Wood some way back in fifth, Robarts finished sixth after struggling to pass Jones who was suffering from a worn front tyre and a down on power engine.